The area around River Fly-In condo has been undergoing major structure and infra-structure re-development with an outlook for a complete 'facelift'' in the next few years.  This is resultant of private enterprise, Merritt Island Airport Authority (TICO), and Brevard County creating a special branch, MIRA, Merritt Island Re-development Agency.
Abutting to the North of River Fly-In clubhouse, the county purchased the property from Poulte Homes over a decade ago and converted it into Veterans Memorial Park with lakes and a waterfront outlook bridge facing the Banana River.  The Veterans Memorial convention center had already existed in this location.  Aside from adding beauty and serenity to this pristine area, the park solved the storm water retention issue of the corridor between Hwy 528 and Merritt Island Airport, and paving the path for homes and businesses to connect to city sewers and re-development.  Brevard county, MIRA, Parks and Recreation, and Veterans Memorial Center Management have agreed to plan a bridge connecting the River Fly-In clubhouse entrance road to the Park.  Residents and visitors of River Fly-In condos would therefore be able to walk or take their bicycles into the park and then onto the Merritt Island Mall property.  Brevard County has a immediate plan to spend a million dollar on music stage, lighting and other improvements for the park.
To the west, Brevard county has just finished a 3.6 million dollar project to pipe the Cone road ditch, and converting surrounding septic tanks to city sewer.  Cone road, which is primary egress and ingress to River Fly-In Condos has been re-surfaced.
To the southwest, the airport authority (TICO) has a 2.8 million dollar plan to rehabilitate the north apron. Funding for phase I has been approved. The current north entrance to the airport from River Fly-In condo's main entrance is about 700 feet.  Conceivably a closer walk-in entrance along northeast side of the airport may be procured.
Cape Canaveral Hospital that is currently located in a barrier island 3 miles northeast of River Fly-In Condos, is being re-located to a newly planned location across from the Merritt Island Mall where currently  the Healthplex resides.  The Health First Board of Directors recently approved new 300 million dollar hospital to be built at this site within next 2-3 years.
Brevard County working through MIRA has a vision to re-develop the Merritt Island Mall with some of the shops located on the waterfront.
Merritt Island Airport improvement projects, River Fly-In Condos construction, Veterans Memorial Park continued improvements, Merritt Island Mall re-develpement, and a newly built Cape Canaveral Hospital, all within 1/2 miles will create a new revived district of 'live, fly, play, shop and work'.
Brevard County is about to undergo its historic boom, bigger than the one in 1960's at the time of inception of the space program.  NASA with its own new programs, Cape Canaveral Airstation now with space force creation, private space industries including Space X, Blue Origin etc., Port Canaveral now being the biggest passenger cruise ship port in the world (3 billion dollar expansion in progress), Northrop Grumman with a contract for next generation defense industry aircraft, high speed train coming to the county, and many other industries, all creating a major uplift in real estate market. 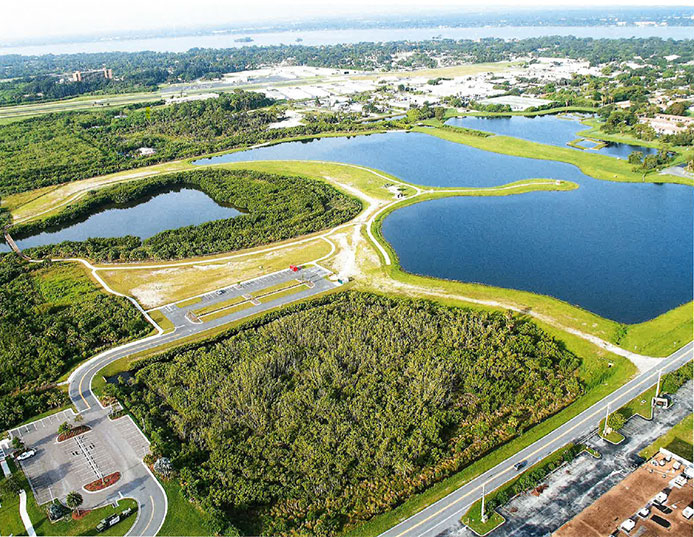